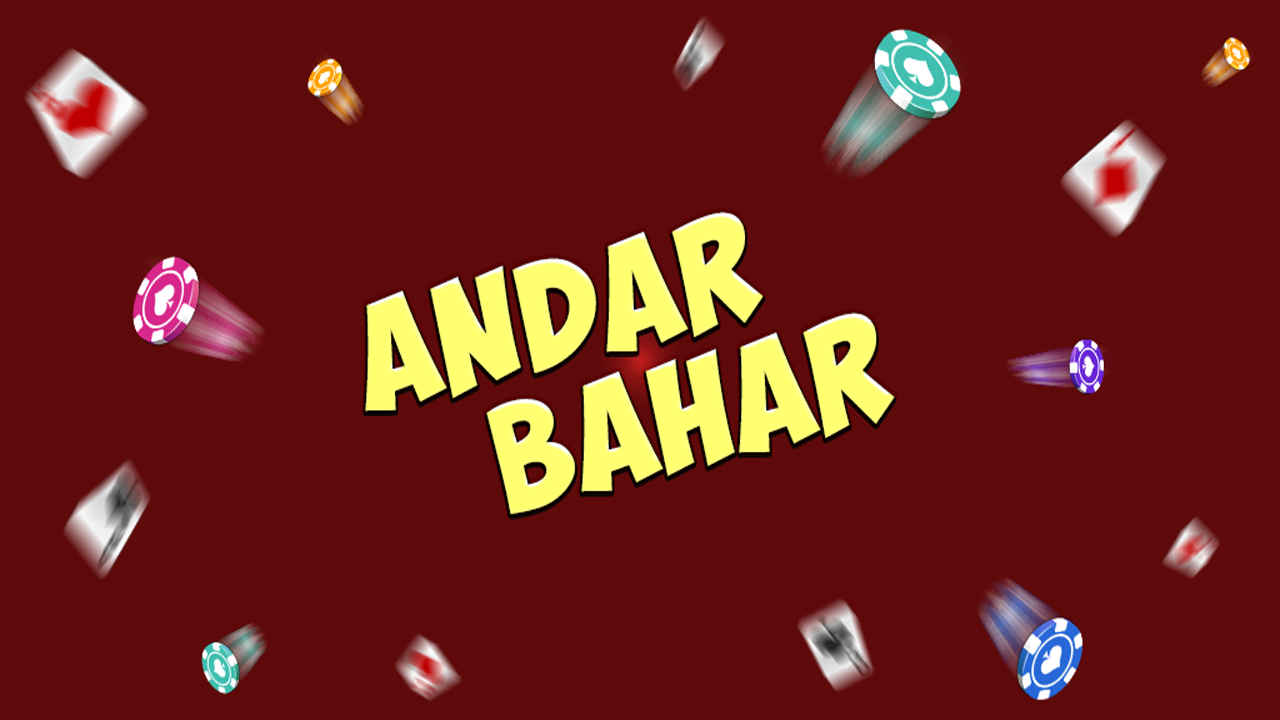 All About Andar Bahar Game

What is Andar Bahar?

Andar Bahar is a straightforward game of chance played with a conventional deck of cards. The game was developed in southern India and then extended to the north. The game’s age is rumored to be several hundred years old. However, this cannot be verified.

However, the popularity of this game in India and the rest of the region is unquestionable. The game’s primary goal is predicting which box will win, the Andar box or the Bahar box. The dealer shuffles the deck before the first card, showing the Joker.

The participants then place their wager by making an educated prediction as to which set of boxes the Joker card will land in first. If you select Andar or Bahar correctly, you win.

Why is Andar Bahar so popular in India?

Gambling has been a pastime for generations; Indians enjoy playing games like Rummy, Teen Patti, and Poker with their families throughout the festival seasons. There are other forms of gambling, but these card games are the most common. However, even if these games are timeless, they are challenging to play. You must commit cards to memory, watch how players wager and assess the odds. Simple card games are sought after by gamblers who don’t want to learn complex rules. The most well-known simple card play is considered Andar Bahar.

The card game Andar Bahar has gained a lot of traction in India for the following reasons:

The game is simple and makes use of a single standard deck. You play a classic guessing game versus a dealer in it. You don’t have to try to estimate your opponents’ cards or memorize many hands as in online poker. A Joker playing card dealt randomly to the center of the table is the first card ever dealt. Additionally, you don’t need to try to create sequences like in Rummy. You need to wager on Andar or Bahar in this situation.

These are the two spots on Andar Bahar’s playing table and making a decision is not too strenuous. Both options have an almost equal chance of winning. When the dealer reveals the trump card, the game officially begins. The dealer will show the trump card before starting to place the cards on Andar and Bahar alternately. Then, players wager on whether the dealer will deal Andar or Bahar another card with the same face value.

Nowadays, most daily tasks are carried out on phones. For instance, you can use your smartphone to make any online transaction. You could also settle your utility payment. Even sending money to another bank account is possible without going to a bank or using a laptop. Consequently, it is not strange that some people would like to bet online.

The popularity of mobile gaming apps also allows users to play Andar Bahar while on the go. Andar Bahar online is ideal for playing while traveling because of its ease. The fact that Andar Bahar has a modest house edge gives players a boost and enables you to maintain your bankroll. The right bet must be placed to benefit from the lowest potential house edge.

The game Andar Bahar was developed in India. The Hindi words for inside and outside are Andar and Bahar, respectively. Indians are familiar with the game as a result. A sense of inclusivity for Indians is also created by the Hindi phrases in a gambling game. Because there are no English terms in the game, anyone who has trouble pronouncing them can still participate.

Played since an early age in most Indian homes, it is taught to kids early. This is because it fosters relationships between brothers and cousins and is frequently played during family reunions. The nostalgic charm of this card game is a factor in its popularity, especially with Indian players.

How to play Andar Bahar?

As with many poker games, the outcome of Andar Bahar depends primarily on luck, with some educated guesses. For a speedy shot game, one 52-card deck may be used. To keep things friendly and straightforward, the likelihood of winning the game is 50/50. Then, players can select between Andar (on the left) and Bahar (on the right) as their preferred side of the table (on the right). The objective is to guess which side of the chosen card will contain a card of the same number when the cards are cut and distributed.

The dealer deals one card face up after meticulously shuffling and cutting the cards. The “trump card” or “joker,” though these words are deceptive, is the card that needs to be matched. According to standard English card game terminology, a joker is a wild card that can be used to depict any card the player chooses. In contrast, a trump card can defeat any other card of a different suit, regardless of rank. Since the two decks are occasionally dealt on each side of the first card, it appears preferable to refer to it as the house card or the middle card. Then the dealer will make two piles, called Andar and Bahar, on which the players can place their wagers.

In a private game, the minimum and maximum bets must be pre-agreed upon, whereas in a casino game, the house gets to pick them. The Hindi words Andar and Bahar are denoted inside and outside, respectively. Inside and outside are represented by the Tamil names for the two piles, ullae and veliyae (outside). It may be the case since, in the classic game, the inside pile is the pile that is closest to the dealer, and the outer pile is the pile that is farther away. In online versions, the layout might look like that, or Andar and Bahar might be to the left and right of the house card, respectively.

The game can be played in many different ways online. In the section below on variants, these are discussed. From the remaining deck, the dealer now alternately deals single cards, face up, to the Andar and Bahar piles. First cards are given to the Andar pile if the house card is black; first cards are dealt to the Bahar pile if the house card is red. Dealing keeps going until a card shows up with the same rank as the house card. Players who placed their bets on the pile with this matching card appear to win; players who placed their bets on the other pile lose.

Andar Bahar is played at real tables with a live dealer.. Despite how straightforward it may seem, you must understand what it requires to sit at the Andar Bahar table. You can employ specific strategies when playing Andar Bahar to develop your winning technique. A few of the winning formula’s tricks and tips are:

Bet More on Andar and Less on Bahar

Playing Andar Bahar real money games with more than three players enhances the likelihood of winning and makes the game more entertaining. By placing a slightly larger wager on Andar than Bahar, you can increase your odds of winning by reducing the house advantage. The most exemplary Andar Bahar winning technique is to be flexible with your bets because this is not a 50/50 game. Your odds of winning Andar are 51.5 percent, while your odds of obtaining Bahar are 48. 5 percent.

In an Andar Bahar live casino, Andar will be dealt the first card, and the winning card will be handed to Andar’s side. Although the modest Andar rewards may deter you from placing bets, you will still win more.

Depending on your level of risk tolerance, you can play one of the two techniques. Martingale Technique: When you lose, double your wager to win a large sum of money eventually. This strategy carries more risk and offers a lower reward. The Anti-Martingale Strategy is when you win a stake here, and your bet is doubled. You can employ this tactic if you’re unsure and don’t want to lose any more money. If you’re lucky, you could earn big money with little risk with the wager you placed right now.

As a beginner, you might be tempted to take larger bets to win big. Instead of making large bets, you should concentrate on lower stakes. In Andar Bahar, little bets keep you in the game for a long time and occasionally result in minor wins. Additionally, you can increase your stake after a loss using the Andar Bahar technique, which raises your overall bankroll. As you become more familiar with the game, you can gradually raise your stakes. Before making your first deposit, read the welcome offer carefully to ensure you don’t lose out on the opportunity to receive free bets.

Set up side bets

In the game, participants can make side bets, which give them the chance to win more money. A side wager is placed along with the participants’ two primary stakes. Therefore, you can place a side wager on how many cards the dealer will deal with before the Joker card shows up. Alternatively, you can wager whether the card put in the box after the Joker card will be larger or smaller and so forth.

Andar Bahar has restrictions, just like all other table games, and each casino is expected to set its limits. These restrictions are placed so that players can set up their bets before the round is dealt. You might occasionally become too engrossed in the game and forget your bankroll restrictions. Placing large bets is no problem if you are a high roller. Small wagerers, however, should exercise caution when making side bets because they risk swiftly running out of money.

The hot and cold technique in gambling refers to placing bets based on your gut feeling. Despite numerous bettors advocating it, this tactic rarely succeeds. Players who adhere to this Andar Bahar betting strategy will wager on the hands with the most victories. They act in this manner, hoping they will continue to be successful. Even though some ardent gamblers may advocate it, this tactic is superstitious and should be avoided at all costs.

Your spending limit should be considered before choosing a table to play at. Planning your budget gives you a better chance of winning more money. However, you will lose sight of how much money you have lost if you are completely engrossed in the game. It is accurate, wildly, if you routinely succeed. You will be tempted to try and make up for your losses. Your account will already be in the red by the time you know it. When your betting budget is exhausted, it is time to abandon the game.

One of India’s favorite games is Andar Bahar. It provides easy rules, reasonable chances, and, for some, a reflective element. Concerning the latter, Indian families like playing Andar Bahar at home. Kids who play this game subsequently seek it in casinos.

The simplicity of the game is mainly to credit for its appeal. You only need to pick one because the chances of Andar and Bahar winning are approximately equal. The fact that Indians are familiar with it further contributes to its popularity. Another aspect of the game’s success is the widespread use of mobile apps. They allow you to play games while on the go. Andar Bahar is the perfect game to play that way because it is easy to play.